The recently shuttered computer games shop was quietly repainted over the May bank holiday weekend, returning to a dull green far from the gaudy bright blue it had worn during the decade or so the GamesWorld had been operating. Older residents of the town remarked on that; it was now the same bottle green it had been when the space used to sell fabric and shoes for the fifty years prior. The new owner must have found the layers of old paint underneath, suggested the butcher, but my neighbour — buying chops — pointed out that he may have simply found old shots of the street on the Internet. I didn’t offer that it could have been entirely coincidental.

Heavy curtains were hung across the lower half of the small window, giving the shopfront the appearance of a solicitors or private offices. A sign painter came down from Dublin and transferred “Seán Childers — Watchmaker” in block silver lettering onto the glass. ‘Watchmaker?’ asked a woman as she passed, and the sign painter shrugged. 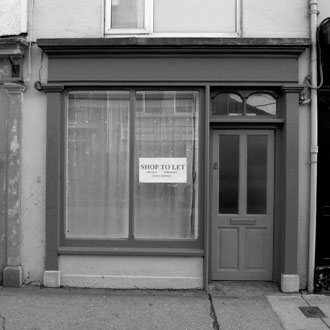 Adapted Image from Steve Bowbrick. Click for Source.It never announced itself, as such. There was no grand opening, no sign was hung upon the door. But on Tuesday morning I tried the handle as I passed on errands. It opened, and a shop bell rang.

The proprietor had moved the back wall of the shop forward, halving the floorspace and creating a large back room which could be seen through a newly installed sliding window. The walls were freshly plastered and painted off-white, and the room was almost empty, save for the window and a long glass cabinet fixed beneath it.

Childers sat behind the window like a pawnshop broker, working away at the counter in front of him. The back room had the appearance of a workshop, from what little I could see through the glass.

The glass cabinet contained five objects laid out evenly along its length of white felt. Each appeared to be a small, circular medal-shaped device. The front of each disc was covered in measurements or numerals. They were all fixed to a short length of leather — two of them black, three brown.

A first I thought they were compasses, as the first one I examined closely had needles radiating from its centre. But it had two needles, each one pointing in different directions. The second device had three needles, and instead of roman numerals it had a garland of standard Arabic numerals around its edge. As I looked at the third device it suddenly became entirely obvious what I was looking at.

‘These are clocks!’ I exclaimed. ‘Tiny clocks!’ The central object in the case bore a huge resemblance to the face of the grandfather clock that stood in my aunt’s hallway.

Childers looked up from his workbench. He looked to be assembling a tiny clock on the table in front of him. Around his head was strapped, in a leather holster, a magnifying eyepiece like a jeweller would wear, and in his hands he held a fine tweezers and an even finer screwdriver. Scattered around him were various metal components and bowls of screws. A selection of remarkably small toothed cogs were carefully arranged in a line on the counter beside him. He put down the tweezers and slid aside the glass window hatch. ‘Sorry?’ he asked.

‘This are clocks,’ I said, gesturing at the cabinet. ‘You are building tiny clocks!’

He smiled. ‘I suppose you could say that.’

‘But what is the point in one so tiny?’ I asked. ‘Anyone hanging this in their house would have walk to within two feet of the wall to read the time.’

‘These are not for walls,’ he said. ‘They are watches.’

‘I don’t know what you mean. Do you hang them in your car?’

‘Ah!’ I said. ‘This is lady’s jewellery. Very interesting. I saw a lady recently who was making earrings out of old pound coins.’

‘It’s not jewellery, as such,’ said Childers. ‘They’re not decorative.’ He removed his headpiece. ‘Tell me,’ he said, ‘what time is it right now?’

I pulled my phone from my pocket and tapped the front. ‘Twenty to eleven,’ I replied, showing him the screen.

He moved his hand out in front of him. As he did so his sleeve rode up his arm and revealed one of the tiny clocks strapped to his wrist. He glanced at it. ‘Twenty to eleven,’ he said.

‘Yes.’ He handed a tiny clock out through the glass, and I took it in my hand. The leather strap had a buckle, allowing you to wrap it around your wrist and tighten it. When I held the clock up to my ear, I could head a small, flat click of the seconds passing. It was quite unlike the loud, ponderous ticking of my aunt’s grandfather clock.

‘It’s beautiful,’ I said, turning it over. The back of the clock was steel, with Childer’s name engraved into the smooth surface. ‘It must have been very difficult to miniaturise a clock like this. But it seems very strange to wear a whole machine to tell the time when you can check the phone in your pocket.’

I laughed. ‘Everyone has a phone.’

Childers did not seem at all put out by my criticism. ‘I think people will like having the time on their wrist. Think about how many actions are required for you to see the time. You have to put your hand into your pocket, locate your phone, remove it, tap the button or screen, and then read it, and finally return the phone to your pocket when you are done.

‘I just have to turn my watch toward my eye. Often, when working at my desk, I can check the time without even moving. I simply look towards my left wrist.’

‘But all you can do is see the time. On my phone I can see the weather or the news. I am not sure people will wear a whole clock just to tell the time, even if it’s a small one.’

‘Time is important to the flow of the day. Nothing else is so important. There’s a comfort in it, I find.’ I did not mention the comfort of my phone’s weight against my leg. Of its often called upon diversion.

I hung the clock over my wrist and strapped it awkwardly underneath. Childers watched while I pantomimed checking the time a few times. It felt both strange and pleasant. ‘They’re very beautiful,’ I said again.

‘Next we’ll be strapping calculators around our necks. Penknives to our ankles.’ I said it grinning, so he’d know I was only joking. He smiled.

I asked him the price, and he told me the amount for each in the display. They were expensive. More expensive than a decent phone. And it only told the time.

I removed the clock and handed it back through the glass, wishing him luck with the new business. Out on the street I pretended to look at the time on my wrist a few times. It was a attractive novelty, but I had enough to carry around already between my phone, cards and wallet. The problem with the modern world, I mused, was an ever increasing number of things people wanted you to desire, to pay attention to. While the tiny clocks appeared to satisfy a need, they were really a solution for a problem that doesn’t exist. Inventors and industrial design students are voraciously creative, and the branches of innovation they throw out with youthful vigour would naturally wither if they served no real purpose.

Whatever Childers claimed, these were creative inventions rather than practical ones. Their existence was an extravagance. But still, I thought, pulling my sleeve up to reveal the memory of the watch, it was something interesting. Something beautiful, if faintly ridiculous. I hoped he would find people willing to indulge that extravagance, for a time, before it withered.